Two deep-seated tendencies in U.S. immigration law are obstructing the expansive reforms long sought by movement actors: incrementalism and path dependence. This Essay recommends that law clinics counter these forces by setting ambitious goals for structural change and by equipping students with kno…

Interior immigration enforcement reaches well beyond deportation. In practice, it also offers a rationale for policing U.S. residents stereotyped as foreign. This Essay shows how a “deportation-centric” approach limits the ability of courts to recognize and redress unjustified surveillance, and it a…

The Problem with Public Charge

This Note seeks to identify the causes of “public charge” confusion. Mapping the exclusion’s history reveals how Congress and the courts have left the administrative state a near-impossible task: reconciling public charge with evolving commitments to public welfare. Drawing on archived Clinton-era n…

Executive Defiance and the Deportation State

Can federal administrative agencies defy the courts? As this Feature demonstrates, executive defiance of judicial authority is already afoot in the immigration system, and in ways that implicate multiple dimensions of the deportation state as well as the evolving relationship between the executive a…

The Denaturalization Consequences of Guilty Pleas

At a critical time when thousands of citizens face potential denaturalization, this Essay proposes an extension of the Supreme Court’s decision in Padilla v. Kentucky to protect the rights of U.S. citizens who are facing denaturalization as a result of pleading guilty to a criminal offense.

Justice Jackson warned in Korematsu that the decision was “a loaded weapon ready for the hand of any authority that can bring forward a plausible claim of an urgent need.” Seventy-five years later, President Trump has picked up that doctrinal weapon. This Essay identifies three reforms that would un…

Ending Citizenship for Service in the Forever Wars

For centuries, noncitizens serving in the U.S. Armed Forces during periods of hostilities have been rewarded with a special pathway to citizenship. This Essay explores how two policies enacted since 2017 are blocking this pathway and reflects on the implications of this shift for the meaning of citi…

The Rise and Fall of Administrative Closure in Immigration Courts

For over three decades, immigration judges used administrative closure as a case-management tool to encourage efficiency and fairness. After then-Attorney General Sessions ended this practice, the U.S. immigration-court system has faced severe and unjustifiable consequences. This Essay argues for a …

Detention and Deterrence: Insights from the Early Years of Immigration Detention at the Border

This Essay examines the early years of U.S. immigration detention, arguing that such detention was brief and limited in purpose. This history has important constitutional implications for current immigration policy, questioning its use of lengthy detention to deter immigrants from pursuing their cla…

This Essay proposes a blueprint for a new humane and effective immigration-enforcement system that could follow the dissolution of ICE. It explores the irredeemable defects of ICE and its enforcement paradigm and suggests realistic mechanisms to increase compliance with immigration laws without dete…

The Claims of Official Reason: Administrative Guidance on Social Inclusion

Under the Trump Administration, the legal validity of Obama-era administrative guidance on social inclusion has been the subject of ongoing contest. This Article draws on the philosophy of law to argue that these policies were issued in a procedurally lawful manner and that they have induced legally…

This Essay traces the historical evolution of the border search exception to the Fourth Amendment to argue that CBP and ICE are currently operating outside constitutional constraints and proposes a tiered approach, restricted in scope and requiring increasing levels of protections the more invasive …

A Legal Sanctuary: How the Religious Freedom Restoration Act Could Protect Sanctuary Churches

Over the last three decades, the doctrine and political valence of protections for religious exercise have shifted significantly. This Note analyzes how those changes provide new legal protections for sanctuary churches, demonstrating how religious freedom statutes can protect marginalized individua…

In the Shadow of Child Protective Services: Noncitizen Parents and the Child-Welfare System

The noncitizen parent exists between two often-conflicting legal identities: that of an immigrant and that of a parent. This Essay argues that state child services should strive to mitigate the tension between these identities and take an active role in shielding these parents from immigration conse…

This Article reveals that Freedom of Information Act requests at seven federal agencies are dominated by individuals seeking records about themselves, including immigration, investigation, and medical records. Yet FOIA is ill-suited to meet the vital needs of first-person requesters, and these reque…

Christine Kwon & Marissa Roy
Over the past year, cities have emerged as crucial sites of resistance. Using San Francisco and the sanctuary city litigation more broadly as a case study, this Essay argues that cities can and should take advantage of the Constitution’s federalism protections to resist federal intrusion onto loc…

The President and Immigration Law Redux

In November 2014, President Obama announced his intention to dramatically reshape immigration law through administrative channels. Together with relief policies announced in 2012, his initiatives would shield nearly half the population of unauthorized immigrants from removal and en…

Uniformity and Integrity in Immigration Law: Lessons from the Decisions of Justice (and Judge) Sotomayor

Though courts and scholars emphasize the importance of uniformity in the interpretation and application of federal immigration law, systemic complexity makes its achievement elusive. In the immigration opinions she has drafted to date on the Supreme Court, as well as in her extensive work reviewing …

In evaluating the legacy of Gideon v. Wainwright, it is critical to remember that the Supreme Court’s decision rested on the Sixth Amendment right to counsel for the accused in criminal cases. American law sharply demarcates between the many rights available to criminal def…

Picking Winners: Olympic Citizenship and the Global Race for Talent

Across the globe, countries are promoting strategic or expedited passport grants, whereby membership is invested in exceptionally talented individuals with the expectation of receiving a return: for Olympic recruits, this means medals. The spread of the talent-for-citize…

Comprehensive Immigration Reform and the Dynamics of Statutory Entrenchment

In his 2008 campaign, then-Democratic presidential candidate Barack Obama promised “comprehensive immigration reform.” Two years into his Administration, and despite continued efforts to promote reform, there has not even been a vote in Congress on a comprehensive bill. President Obama’s prede…

Defining Family in Immigration Law: Accounting for Nontraditional Families in Citizenship by Descent

Most immigrants who gain permanent residence or citizenship in the United States do so through familial relations. As a result, immigration authorities must constantly decide what constitutes a family. Unfortunately, the Immigration and Nationality Act (INA) provides li…

Indefinite Detention of Immigrant Information: Federal and State Overreaching in the Interpretation of 8 C.F.R. § 236.6

The Significance of Domicile in Lyman Trumbull's Conception of Citizenship

This Note argues that immigration courts have served and continue to serve as important sites for the perpetuation of national identity myths. By focusing on a subset of cases called “cancellation of removal,” I examine the functional criteria by which immigrants are gra…

The President and Immigration Law

The plenary power doctrine sharply limits the judiciary’s power to police immigration regulation—a fact that has preoccupied immigration law scholars for decades. But scholars’ persistent focus on the distribution of power between the courts and the political branches has…

Making Up for Lost Time: A Bright Line Rule for Equitable Tolling in Immigration Cases

Anupam Chander’s article Minorities, Shareholder and Otherwise brilliantly offers a “conservative” justification for a U.S. constitutional law truly dedicated to fairness and justice for all. It does so by counterintuitively looking to the bottom-line-oriented world of corporate law. This comm…

Enforcing the Treaty Rights of Aliens

Despite the Supremacy Clause’s declaration that treaties are the “Law of the Land,” efforts to incorporate treaties that guarantee individual rights into domestic law have been stymied by a wave of political opposition. Critics argue that giving these treaties the force of…

Immigration Reform: Back to the Future 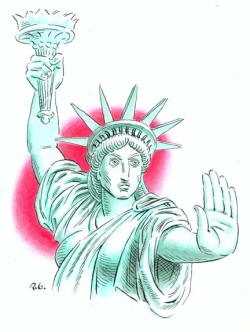 Aligning Immigration and Workplace Law, One Step at a Time

Federal immigration reform has seized public attention for the first time since Congress last made major changes in immigration policy in 1996. People are taking to the streets and engaging in heady debates about what being a nation of immigrants really means. Our answer will shape the workplaces of…

Backlash at the Booth: Latino Turnout After H.R. 4437

The Latino community has mobilized as never before in response to H.R. 4437, the punitive immigration bill sponsored by Rep. James Sensebrenner (R-WI). Newspapers declared that the marches in Los Angeles, Dallas, Phoenix, and Chicago marked “a new day of Hispanic political involvement.” More tha…

Non-Self-Executing Treaties and the Suspension Clause After St. Cyr

In INS v. St. Cyr, the Supreme Court rejected Congress's attempt to foreclose judicial review in various provisions of the Antiterrorism and Effective Death Penalty Act (AEDPA) of 1996 and the Illegal Immigration Reform …

Much of the debate regarding post-September 11 counterterrorism initiatives has centered on the potentially damaging effects of these policies on constitutionally protected rights. Many observers have weighed the balance that the government has struck between national securi…

Reorganization as a Substitute for Reform: The Abolition of the INS

September 11th and the events that followed highlighted the shortcomings of our nation's immigration policies and their enforcement. Gaffes, such as the issuance of student visas to two of the hijackers on the six-month anniversary of 9/11, reinforced public perceptions that …