The Ending Forced Arbitration of Sexual Assault and Sexual Harassment Act was supposed to eliminate forced arbitration of cases involving sexual misconduct. This Essay explains why the Act fails to do so. In addition, it outlines what lawmakers and courts can do to fix this problem.

Divide and Conquer? Lessons on Cooperative Federalism from a Decade of Mental Health Parity Enforcement

Just as private parties use contracts to facilitate joint projects and nation-states use treaties to organize joint undertakings, our domestic governments use written instruments to formally coordinate their activities. This Article analyzes these distinctive contract-like instruments in which both …

Lawrence Lessig’s Fidelity & Constraint: How the Supreme Court Has Read the American Constitution makes an important contribution to “New Originalism.” This Review explores how Lessig’s theory of fidelity to role can inform an originalist understanding of constitutional construction.

In the standard account of federalism’s eighteenth-century origins, the Framers divided government power among two sovereigns to protect individual liberties. This Article offers an alternative history. It emphasizes that federalism was a form of centralization—a shift of authority from diffuse quas…

A Response to Justice Goodwin Liu

The Past, Present, and Future of Section 1115: Learning from History to Improve the Medicaid-Waiver Regime Today

This Essay argues that section 1115 waivers in the Medicaid program have increasingly bee misused, opening the door to ideologically motivated cuts or preconditions on coverage, and suggests a response.

Bond v. United States failed to answer important questions about the scope and limits of the treaty power. This Comment highlights an underexplored factor driving the Framers’ formulation of that power—the threat of war inherent in all treaty violations—and its implications for Bond’s lingering ques…

The Reach of Local Power

Recent litigation has challenged local California prosecutors’ power to seek and receive statewide relief for violations occurring outside county lines. This Essay argues against this trend and explains why it is inappropriate to apply the constitutional norms that state-versus-federal conflicts to …

Since the Supreme Court's tripartite split in Shady Grove, federal courts have struggled to determine whether a Federal Rule of Civil Procedure and a state law conflict under Erie. This Note proposes a novel federalism-based avoidance canon to identify such conflicts.

Arbitration has begun to take a new form: mandatory arbitration provisions built into corporate charters and bylaws. The debate about the merits of arbitration is well worn, but its application to shareholder claims opens the door to a different set of responses. This Essay provides one, explaining …

Sexual Harassment Law After #MeToo: Looking to California as a Model

The #MeToo movement has motivated people to speak out about sexual harassment, but many of those speaking remain vulnerable to retaliation. This Essay provides the perspective of an employment lawyer on the shortcomings of sexual harassment law and how state law can afford greater protection.

Christine Kwon & Marissa Roy
Over the past year, cities have emerged as crucial sites of resistance. Using San Francisco and the sanctuary city litigation more broadly as a case study, this Essay argues that cities can and should take advantage of the Constitution’s federalism protections to resist federal intrusion onto loc…

Asking for Directions: The Case for Federal Courts To Use Certification Across Borders

For more than a decade, the bench, bar, and commentators have disagreed as to whether judges should look to decisions of international and foreign courts for guidance in resolving disputes that appear in U.S. courts. In 2003, Justice Scalia’s dissent in Lawrence v. Texas warned darkly that…

Introduction Federalism scholarship and doctrine have long viewed the states as monoliths.1 It is New York that is commandeered,2 Florida’s sovereign immunity that is violated,3 and Indiana that is coerced4—not officials, agencies, or political parties within the state, but the state…

The Sum of All Delegated Power: A Response to Richard Primus, The Limits of Enumeration

In his provocative article, The Limits of Enumeration,1 Richard Primus rejects what he calls the “internal-limits canon” and challenges the assumption that the powers of Congress do not add up to a general police power, such that “there are things Congress cannot do, even without refe…

Coming in the midst of the Rehnquist Court’s federalism revolution, Printz v. United States held that federal commandeering of state executive officers is “fundamentally incompatible with our constitutional system of dual sovereignty.” The Printz majority’s discussion of hi…

Intrastatutory Federalism and Statutory Interpretation: State Implementation of Federal Law in Health Reform and Beyond

State implementation of federal law is commonplace, but has been largely ignored by the interpretive doctrines of legislation and administrative law.  We have no Chevron, federalism canon, or anything else for state implementation, nor any doctrines that ask how Congress’s…

Intersystemic Statutory Interpretation: Methodology as “Law” and the Erie Doctrine

State Pension Deficits, the Recession, and a Modern View of the Contracts Clause

Multiplicity in Federalism and the Separation of Powers

The Ideological Origins of American Federalism

[To] halt the law's evolution... would be to sever property's link to the culture it serves. In time, a static property regime would inevitably become an anachronism and would gradually be perceived as an obstacle to progressIn Stop the Beach Renourishment, Inc. v. Florida Department of Environmenta…

CAFA and Federalized Ambiguity: The Case for Discretion in the Unpredictable Class Action

A statute pointedly described as an “opaque, baroque maze of interlocking cross-references” is unlikely to represent an intelligent response to a fundamental failing in one of the most complicated and divisive areas of law. Yet, the Class Action Fairness Act (CAFA), ostensibly enacted by Congres…

Tremors of Things To Come: The Great Split Between Federal and State Pleading Standards

The States as Laboratories of Statutory Interpretation: Methodological Consensus and the New Modified Textualism

This Article offers the first close study of statutory interpretation in several state courts of last resort. While academics have spent the past decade speculating about the “death of textualism,” the utility of legislated rules of interpretation, and the capacity of ju…

In the decade following Seminole Tribe’s ruling that Article I is not a grant of authority to abrogate state sovereign immunity, scholars and courts overwhelmingly agreed that the Eleventh Amendment barred Congress from subjecting states to suit in bankruptcy proceedings…

When the Interests of Municipalities and Their Officials Diverge: Municipal Dual Representation and Conflicts of Interest in § 1983 Litigation

In many cases, municipal attorneys defend both a municipality and a municipal official against § 1983 claims. Some defenses available to the two types of defendants are incompatible and may give rise to conflicts of interest. This Note analyzes the problems associated with…

This Essay addresses a gap in the federalism literature. Scholars have offered two distinct visions of federal-state relations. The first depicts states as rivals and challengers to the federal government, roles they play by virtue of being autonomous policymakers outsid…

A broad coalition, including companies formerly opposed to the enactment of privacy statutes, has now formed behind the idea of a national information privacy law. Among the benefits that proponents attribute to such a law is that it would harmonize the U.S. regulatory ap…

When states accept federal funding to administer a joint federal-state program, what assurance is there that they will conform to the requirements of governing federal law? This question takes on a new urgency in the Medicaid context since the § 1983 lawsuits that have hi…

Of Property and Federalism 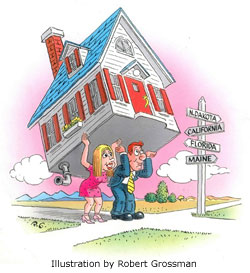 A Private Idaho in Greenwich Village?

Should a landlord and tenant negotiating the lease of an apartment in Greenwich Village be entitled to spurn New York law and instead agree that their relationship is to be governed by the law of Idaho? Bell and Parchomovsky (B&P) apparently would answer yes. Their potentially revolutionary proposal…

First, the good news: Bell and Parchomovsky (B&P) see federalism’s potential to foster benign competition in the production of legal rules. This vision takes federalism beyond the traditional view of states as laboratories for experiment. It looks to federal structures that create a market for leg…

The Duty To Defend

Section 5 of the Fourteenth Amendment grants Congress the "power to enforce, by appropriate legislation," the Equal Protection and Due Process Clauses. Yet in the past seven years the Supreme Court has invalidated five different laws--including three landmark civil rights la…

As the Supreme Court further plunges the world of criminal sentencing into turmoil, state courts in particular are scrutinizing their own statutory sentencing schemes and judicial practices. Ever since the Court's holding in Apprendi v. New Jersey (recently reformulated and…

Federalism concerns, underappreciated in the takings literature, play an important role in shaping the Supreme Court's takings jurisprudence. The Takings Clause does not guarantee any particular property rights; instead, the Clause protects primarily against change in backgro…

What Kind of Immunity? Federal Officers, State Criminal Law, and the Supremacy Clause

When, if ever, may a State prosecute a federal officer for violating state criminal law while discharging his federal duties? Over the past decade, developments in the doctrines associated with "federalism" have redefined the constitutional status of federal attempts to regu…

The Tenth Amendment and Local Government

This Comment posits that the Constitution may well carve out a limited space for the people to express themselves and exercise certain powers through local self-government—without interference by the state. More specifically, the Tenth Amendment endows the people with the right to choose and define …

Does American corporate law work effectively to enhance shareholder value? The recent corporate governance crisis makes this time as good as any for reexamining the basic structure of this body of law. This Essay provides such a reconsideration of a defining feature of U.S. c…

This Comment argues that a significant, but unnoticed, way around state sovereign immunity has become available under current law. Although sovereign immunity now generally prohibits actions against states for violations of the Americans with Disabilities Act (ADA), a plaint…

The Law of Nations and the Offenses Clause of the Constitution: A Defense of Federalism

One of the most important features of the United States government as originally conceived by the Framers is that, even before the addition of the Bill of Rights, its powers were strictly regulated by the Constitution. Instead of being a supreme parliament, able to do whate…